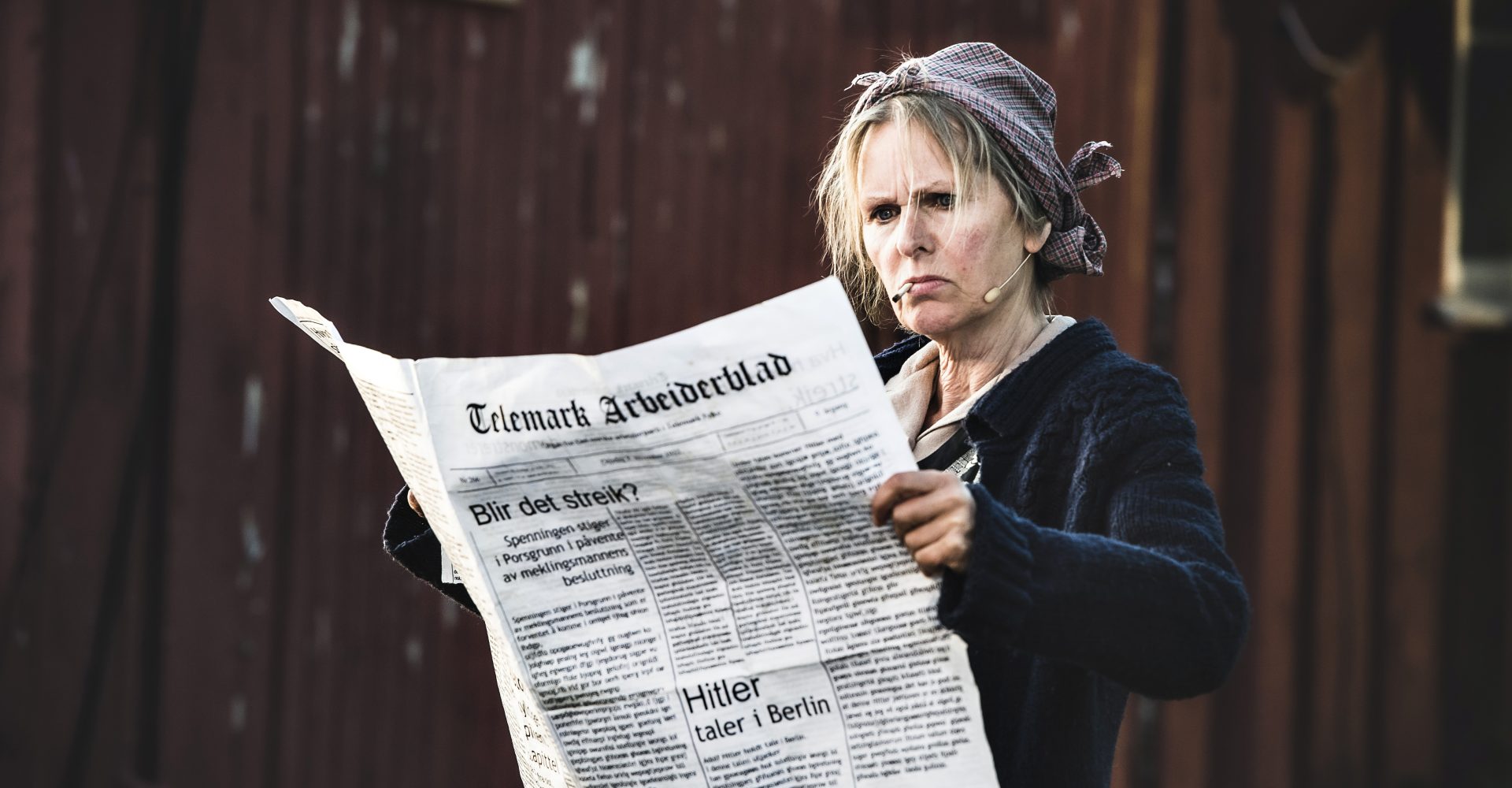 HOW DO I MAKE THE TEXT? –  A directors manual

The last performance I directed, was part of a festival where there were discussions about the work, and questions to the artists after we had performed.

The director of the festival, Kristian Seltun, was interested in the text of the performance, of the rhythm and the poetic language, and he asked me how I made the text.

How do you make the text????  How do I make the text? At that moment, I realized I have a system, simple and functional. I will try to tell you.

This performance, called  The Happy Prince, is based on a story by  Oscar Wilde,  told by two lonely characters who meet on a rubbish heap. These characters  also tell their own personal parallel stories.  This was the starting point for the work. This means we knew the skeleton of one of the stories, which is of course a great help. Re-telling. Re-inventing.

In earlier articles, I have written a lot about the physical work of the actor, which is my tradition. In this article, I will focus on the text.

I ask the actors to prepare text improvisations, which means I give them a specific task, a theme, to think about for next days work. In the beginning, they do solo improvisations. First, I ask them to tell the story from the angle of the character they are going to play, always using I. I was there, I tell you what happened to ME.

They must describe as much as possible. How did it look, what colours, smells, what was the weather like, describe the other character, how did it feel. Go in to the story.

This is quiet work, deep concentration, the actor sits on a chair or stands in the room and talks, talks, when they get eager they start showing with gestures what they mean, and I write, I write it all down, quickly, I have developed a technique of fast writing, I must write it all.

Afterwords, I give it back to the actors. I read loud the text I have written down, we agree on where it was interesting and where it wasn’t. There is always gold in this work, but also a lot of “rubbish”. The gold… This always happens: details described there and then, open up the story and give surprising input none of us could foresee.

We decide on a point of view, a point from where the story can be told, what we want to say with this. The overall intention.

The next thing I do, already after the first days improvisations, is to make a map of the performance; A scenario, where I split the story into a certain number of scenes. I give a number and a name to each scene, sometimes with small drawings as well.

Then I start to fill in the themes in the scene where I think it belongs.

Then I choose the theme for the next day. One specific description from the improvisation seems to contain a possibility for development. It can be a detail that seems to trigger a new angle, a personal angle. I focus on that, asking the actor to enter that specific topic. At this point, the actor will probably start to do more physical actions while improvising text.

I write and write, text and physical actions. My hand hurts.

What one actor describes in one sequence, can be picked up by another actor in the next improvisation and developed further.

Each day after having worked in the space, I go to my computer and fill in themes in the scenario and text in the manuscript, developing it as I find it best for the story. If one actor gives a text, I may take the liberty to give those words to the other actor if that seems to be the best. No hard feelings? Yes, sometimes. But I have to choose the best bits.

I also sort out their physical actions, placing them into the scenario where I think it can be used.

In order to open up the possibilities of the story even more, I can ask them to tell it from different angles. One day, it may be the neighbour who is telling, what SHE saw and heard, how she reacted to this. What was her impression, how did she see the characters, what does she remember? This leads to another interesting aspect, which is memory. Two people having lived the same story, can still tell two different stories. Memory is personal.

Or, I can ask the little fly that sat on the wall and saw it all, to tell its version.

And maybe I ask the actors to swap roles. Tell it from the perspective of the other one. What happens then? Again new inputs and sequences that can be useful.

After a few days, we have text material, or themes, that the actors know, and they start improvising together. I give them a specific task: the first meeting. They are already full of information from the text work we’ve done, and now is the time for meeting physically in space, and trying to make dialogues and actions together.

These improvisations are often quite short and specific. I write it all down in my book. My hand hurts…

After one week, I have at least two big writing books full of words that only I can read, but actually, the whole performance is already there. In the book.

And every day, I fill in new words and actions into the scenario and the manuscript. I improvise with my computer, building the dialogues based on each days work.

I may also ask them to do pure physical improvisations, without text,  in order to focus on the physicality of the character, and on the space. Always on a specific theme.

Step by step, I build the performance, always from the actors own material, but I may transform it, put it in a scene where I think it fits in better than in the improvisation, always using my map as a reference.

It may seem unpractical, because I end up with hours and hours of material, and the actors get new text from me every day, then we change it, another new text, they have to remember to through away the old manuscript from yesterday because today we have a new one!!! (We’ve had many confusing times when the actors had each their different manuscript!)

Loads of words.  But, paradoxically, this method makes me able to work quickly, because we always know something about what we are looking for.  After seven days, we had a scetch for the whole performance. It lasted for two and a half hours (it is now 50 minutes), completely unrefined, but then next step is cutting, cutting, refining the scenes, killing darlings, developing and fixing. And at one point, just before the premiere, we had to say stop. Now, this is the text. We are not going to change it!