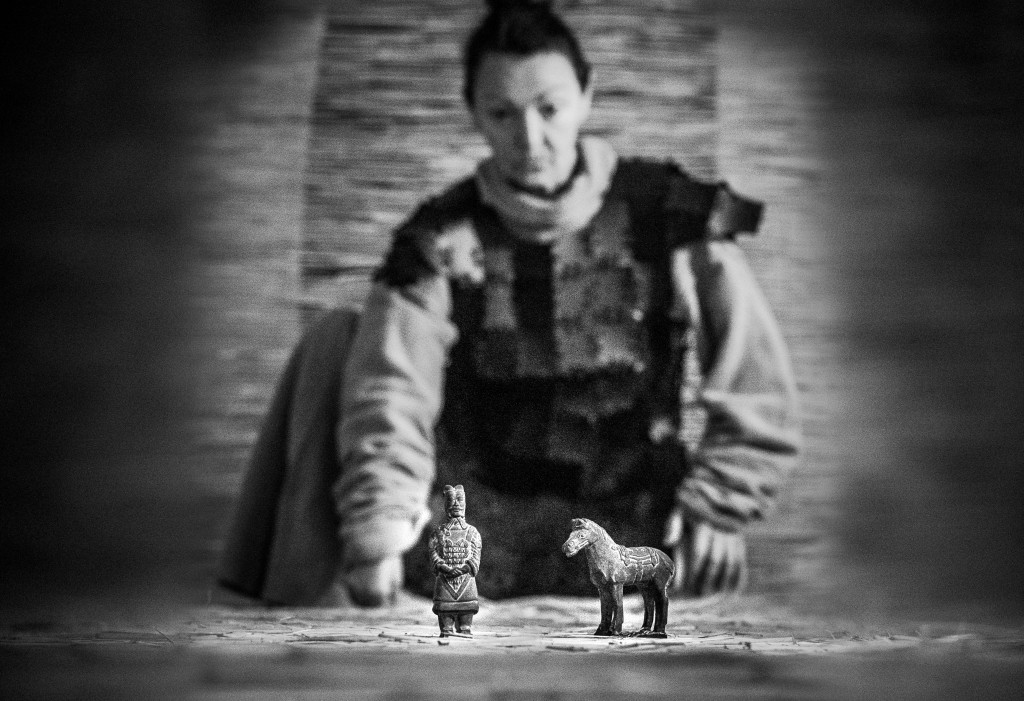 7 Songs of the Refugee is the third solo production based on Georg Johannesen’s texts featuring Geddy Aniksdal. The previous productions Blue is the Smoke of War (1997 – 2005) and No Doctor for the Dead (with Anette Röde Hagnell, (2004 -) have been performed on several continents. 7 Songs of the Refugee was first produced in winter/spring 2015, and had its premiere during the Porsgrunn International Theatre Festival in 2015.

7 Songs of the refugee is also performed in Norwegian – Flyktningens 7 songar – and Spanish – 7 Canciones del refugiado.

The drama takes us to China twelve hundred years ago to the downfall of the mighty Tang dynasty. We meet the hermit Tu, an old man who is “exiled forever”. He fell from a position of high office at the Emperor’s court: “It was a misunderstanding: I expressed myself too clearly”. Now he is a refugee, living on the few herbs he can find under the snow. In a flashback he remembers his years as a soldier at the front, how he had to leave his family, and the bloody battles he fought.

The whole world is in confusion of war

The bale fires flare over the whole earth

Corpses are piling up on the grass, and the smell is terrible

Blood runs like water, reddening the rivers and the plain

There is no safe place on earth

I must make up my mind to go on,

Leave my home once and forever

“He is the greatest of Chinese poets without exception … There is an immense calm and an immense irony in his work, and a terrible sympathy. He has little, or no, self-pity … He looks at the earth calmly and dispassionately, having shared all evils, having shared all disasters, a man who is not unlike other men except in the range of his sensibility.”

Tu Fu came from a family of scholars and he could and should have held one of the highest offices at the Emperor’s court, but he failed the imperial examinations. He lived through desperate times, when the Chinese empire was invaded by Mongol tribes. There had been frontier wars from the beginning of time, but now the wars were infinitely more real, and the conscription regulations imposed by the Emperor infinitely more terrible. Old men, and even women, were hauled off to the wars.

Tu Fu was impoverished, his children starved to death, and the war drove him from province to province. In the end he was found in a ruined temple  after a storm, half dead from hunger and exhaustion. His survival was celebrated with food and wine but that killed him.

Tu Fu’s poems are not afterthoughts, portraits of war when the wars were over. They were written by a man who felt the full force of the suffering around him. His “I” is always a “we”.

All of the English texts in this performance are based on Georg Johannesen’s Norwegian translations which were published in 1968. At that time, at the age of 37, Johannesen was already well-established as a poet, a rebel and a sharp critic of literature and politics. But, as he told us years later, he wanted to put the mask of an older man, and Tu Fu was perfect for this. Without this book, simply titled “Tu Fu”, it is unlikely that we would have taken such a deep interest in the Chinese master poet of more than 1200 years ago. But Johannesen managed to draw Tu Fu near to us. In the afterword to the 1968 edition, he explains some of the thinking behind his interest in Tu Fu:

Some of the finest Western translators of Chinese poetry (i.e. Arthur Waley and Ezra Pound) have passed Tu Fu (712-770) respectfully by. One can understand them. Art historians should probably avoid reconstructing the Ose-berg Viking ship from a radar image. A Norwegian who knows no Chinese should maybe also refrain from trans- lating Tu Fu into his own language…But on the other hand, NATO’s Norwegian newspapers are published every day. In a reasonable world I think the opposite should have been true: Tu Fu would have been printed every day while VG (Norway’s leading tabloid) would only be allowed to come out  at 1200 year intervals.

In the late summer of 2014 I started to carve out possibilities for making a new solo work. Almost without hesi-

tation I returned to Tu Fu.  Tu Fu`s poems have been a source and text material in several of my earlier performances. There are some actions connected to this work, that are permanently impregnated into my body. Some words are lodged in my mind. They stay, they have moved in for good.

This extract of his poem lives with me:

Farewell to my Old Wife:

The country is still at war; no safety

Old as I am, I cannot retire

My son and grandson died at the front

What good is it to me to live on earth?

I set aside my stick and go out doors

With aching heart and empty mind

Fortunately my teeth are all sound

But I am afraid my bones will give up

Never mind, I am wearing my uniform

I bow to the officer, I bid him farewell

My old wife lies by the roadside weeping

Her summer dress made ragged by the winter wind

I don`t know if I will see her again

And yet I am afraid that she will catch cold

I leave with no hope of returning

Yet she tells me:

Like a living tattoo. These words and what they evoke were calling to me again. An ache, a kind of unrest, a special need of some sort were calling from afar. A need perhaps to address dark matters. The sadness of our wars in our times. The correlation to parts of someone`s every day life. A seemingly never ending tragedy. A futile attempt at a quiet shout. Towards the cold impotence.

Being almost twice as old as Georg when he started with his translation of Tu Fu, I ask myself: Where are you going to? Or escaping from?

Am I going to escape into a world of loaded silences, a strange after. The battle. The bomb. A quiet fright, at times with a strange beauty. These words, these lived experiences, from Tu Fu`s China, a place so far away. So here, today, will do: these words will do now as they have done for more than 1200 years.

7 Songs of the Refugee are my learning pieces. I have tried to apply the same three qualities that Tu Fu told us that the army leader saw in his generals; patience, experience and understanding. The performance is a piece to be seen with your ears and heard with your eyes. There might be a sensation of relief afterwards. To know how lucky we are. To be in a theatre space. To only have to witness this spectacle, not live it. To trust that deep inside our hearts we have our sense of reason.

Call me you. Call me Tu.

Call me Tu, the newcomer, the old one

He of  the long hair, he of the  white hair

The herb gatherer: He who crouches under the hill

He who stands on the cliff as it snows

Talk of me and say: He is exiled forever,

He owns nothing, he coughs in the wind

His clothes are too thin for our climate

That was my first song: my breath white

I have a long spade with a pale wooden handle

It is not easy to dig deep enough

I have a short cape that barely covers my knees

It is not easy to keep my feet warm

The snow is covering both the herbs and my feet

Today I found nothing, it is dark, I go home

I have an empty spade in one hand

The other hand is empty too, this was my second song

Which of my brothers is alive today?

Who is hungry? Who has eaten?

All we brothers were born on the same floor

China has many roads covered by dust or snow

The cranes have flown across the sky

I should have followed them both south and north

For this is my third song, it asks this:

Which of my brothers will bury me here?

My youngest sister is already a widow

I have not seen her for eight years

She lives by a wild river without boat or bridge

The road there is barred by arrows and enemy flags

My fourth song speaks of this, I am afraid

There is also a closed road and a wild river here

Here I live; but why only  here?

I dreamt last night that a friend grasped my shoulder

I did not notice, but answered him in my sleep:

Here is my fifth song: Only my body lives here

Down south they say a dragon lives in the sea

Up north naked trees point towards the sky

The leaves fell into the water, but the dragon did not stir

From the east serpents are slithering here: They dare

I have a sharp sword that I cannot lift

This is my sixth song: now it is springtime

The wind became warm again this year too

Here I have become old, without becoming anything else

I have lived from picking berries in the woods

In the capital the officials are still young

It is natural that young people will rise in the world

My wisest friends live in the mountains

Yes, this is the seventh song, it ends quietly:

I opened my eyes and saw how rapidly the sun set

On the use of martial arts techniques

This performance, depicts an old warrior who’s lost everything in the war and barely has strength to fight but has no choice. The martial technique shown in this portrayal, (including  spear, staff and sword-play), comes from traditional teachers who’s lineage is traced back to the Shaolin temple.

The sounds and facial expressions originate from the  Iron Wire System, which utilizes 5 emotions; Anger, Fear, Shock, Grief and Joy.

Last but certainly not least, I thank the Director, Tor Arne Ursin and Actress Geddy Aniksdal for their hard work and patience interpreting my martial arts coaching. I am humbled by their persistence and focus, and sincerely hope you appreciate the performance as much as I enjoyed working with them.