Hey, babe, take a walk on the wild side, by Geddy Aniksdal 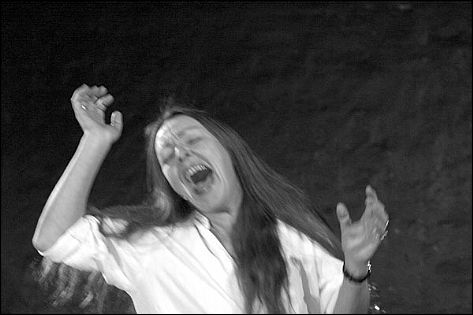 Even a gesture makes a difference, even a comma changes life to death.
Death to life. A gesture becomes a book, a play. A life. The theatricality in life I
appreciate, the life of theatre I believe in. I learned that at home. My first
home, my parents home. Home.
I am born; impatient: the first is a fact, the second an observation. I want
Things to happen. If not I have to make them. This is one of my sorrows: that
not enough Things are happening. Like Peace, to be specific. Like a joyous
world to be more specific, or general.

It is so much more difficult to stay than to go.

Hey, babe, take a walk on the wild side. (Lou Reed)

My house becomes the jungle. My thoughts meander. My body becomes …
Possibly only I can identify my own trespassing. It belongs to a subtle obscure
level. For others. At times for me. Evasive. Intangible.
Giant invisible steps in time, space. What is the difference between swimming
against the current or pissing against the wind?
Trespassing … the dull, tedious, everyday virtues of patience, endurance,
humility, forgiveness. Their unde-niable importance.
Trespass … tear down the stop sign? Put up the stop sign? Signal stop, need
to stop in order to go.
Trespass … work to understand without talking, acknowledge deep satisfaction,
feel peace, be at ease. Trespass into maturation, like wine; good vintage. Not
vinegar.

Every action needs an element of risk.

Giant invisible steps in time, space. The difference is: only dead fish swim with
the current, only fools piss against the wind?

Is it at all possible to live in the world after World War II?
To live … to be-li(e)ve in progress? Progress of what?
Poetry? Friendship? Theatre? Consideration?

Old paint on canvas, as it ages, sometimes becomes transparent. When that
happens it is possible, in some pictures to see the original lines. This is called
Pentimento, the painter repented … (Lillian Hellman)

To see the original lines; to see lines. How is it at all possible to steer towards
some- Thing important? To oneself and thus to others.
My father used to tell me that if someone walked in a different direction – a
different direction to that of the flock – I would be the next to follow. I, a
follower? Of the outsider? One plus one makes two. That’s already a group.

My mother used to say that we should make our own lives. Own life. It is
difficult to create and recreate your own life everyday. Have. To. No? To not fall.
Asleep.
To fall asleep in the cold could bring death. It feels warm and wonderful. It is
the End. Not to be continued.
Doubts, conflicts.

There is a short walk from my house to the theatre. On the last corner before
facing the theatre I have my checkpoint. I stop, ask myself if I want to enter,
answer, and, most of the time, enter.
There are days, however, when I hesitate. There are long walks and short
walks. Short cuts. Sometimes short cuts turn out to be long. No points of no
return.
Days of work seemingly futile, dreamy, woolly, serpent-like. There is nothing to
hold on to and I long for the Thing. To hold on to. To rely on. To know of. And
obviously, I want some-Body else to find it.

As children we started to dig to get to China, as we had been told it was on the
other side of the world. To Chance! Dig!
I long to be a worker with a visible task. More fire logs to chop and stack.
Visible results. Here and now. Quickly.
I long to be away. To be. Elsewhere. A indefinable elsewhere. Here to be else-
Where.

Sometimes I go to a bar close to my home, close to the theatre; it is the
waterhole in between. A Transit place. An Oasis. A Haven. A Hole. The Thing.
The name of the bar is Sailors’ Inn, and have we sailed! Many important
decisions have been made there, whilst sailing. The new generation of sailors,
mingled with the old generation of sailors coming to Herøya Harbour. We are
many foreigners here. I am often a foreigner. My husband, who is from this
town and thus one of the locals, is often complimented for how well I speak
Norwegian. In the beginning I got furious about the ignorance of my own
people who cannot recognise a dialect from their own country. Afterwards I
understood that it is the combination of working in a theatre group, not being
from the town and speaking a distinct dialect that makes me a foreigner. A
double foreigner. A double trespasser.

It has taken our theatre group a long time to come home. In the early days an
article was written about the group, calling us ”the children who stayed at
home”. The group – and the children – being the boys. The Boys. The Boys.
The world must be fond of Boys. They are almost like the Thing. The Boys, in
fact, became men a long time ago. They continue to be The Boys, just as I
continue to be my mother’s little daughter. In the beginning it was hurtful. No
matter what we women did, it was The Boys. The Boys. The Boys. Everrrybody
wants Boys.
Wherrrre arrre the limits?
At a certain point I felt very stupid about the whole thing, here I was, a woman
with a solid background in the women’s movement, finding myself fighting
invisibility in Porsgrunn.
Could I possibly go back to the Stone Age and start screaming again?

Other people, other places, think that Grenland Friteater is run by women (is it?
Maybe it is? Ha, Ha!), or that it has an ”all women policy”. These thoughts
come from abroad.
Trespass … I still cannot understand the species, the human brain, the ego,
the individual drive, the ambitions, the eternal quest, the Thing.
When Anne-Sophie Erichsen and I, with the help of The Boys, arranged the first
Magdalena here in Porsgrunn, I wrote an article pointing out some working
structures that were not fruitful. At the end of the project a woman came up to
me and said: ”How can you be so dissatisfied with your own situation? You
have your own theatre and The Boys are helping out. Your Boys look after the
children, run the Bar, make food, and everything …” I nod and nod, and hide
my shameful face all the way up to ”and everything …”

Hey, babe take a walk on the wild side … du-du-du- duuuuuuuuuuuuu …

Am I not allowed to want changes when basic needs and rights have been
assured? Is it not important to go on improving oneself and others?
Where does that leave me? It leaves me looking after myself, it leaves me
trying to stop whining, complaining. It leaves me trying to sort out what is
most important to me. Not even I want/can do everything.

Walt Whitman would say: ”I am large, I contain multitudes”.
I swallowed – hard – the first time I read it. Later I thought: he’s tough, it’s
okay.
A sidetrack? The sidetrack to the original sidetrack? This is the sidetrack. I am
afraid I have trespassed myself out of these pages.

I have never been an actor concentrating only on my craft. The craft is to live.
The art of living.
What has this to do with women in contemporary theatre? Theatre, Women and
Trespass?
You are right! Yes! Everything. Fortunately. Unfortunately.
Should I stay or should I go?

I think I would not exist if I had not thought about this question. And you know
what? I am too greedy.
I am too trespassed. Too capable of doing numerous things. Not well enough.
Too ”good” for my own use. In the discussion around multiple realities,
identities in virtual reality, I hear a resonance from the old world. It used to be
called schizophrenia. It used to be a diagnosis of a problem, of something
wrong, of something split, splintered, not in accordance to the real self. The
real self?
In this context it is possible to understand Walt Whitman’s words
differently: ”I
am large, I contain multitudes”.
Are there no limits? Are there no longer any ”No Trespassing” signs?
In one world I want them, need them, find them; on the other hand … Just
listen to that expression … on the other hand.
Instead of losing our tailbone could we grow a third hand? Virtually.
Stories tell us that the adventurer goes where she should not.

Hey, babe take a walk on the wild side …

Kenzaburo Oe and Amos Oz have been writing letters to each other in public.
They talk about the need for disarmament. Oz talks about humour. His
grandmother said that when you can’t cry any longer is the right time to start
laughing.
Oe and Oz are writing from two very distinct areas in the world. Hiroshima and
Nagasaki are Oe’s actual and literary background while for Oz it is the dilemma
of the Middle East. In his childhood Oz wanted to become a book, even if
books also got ”killed”, burned. He thought of the possibility that one or two
copies might survive and end up, for example, in a library in Helsinki.