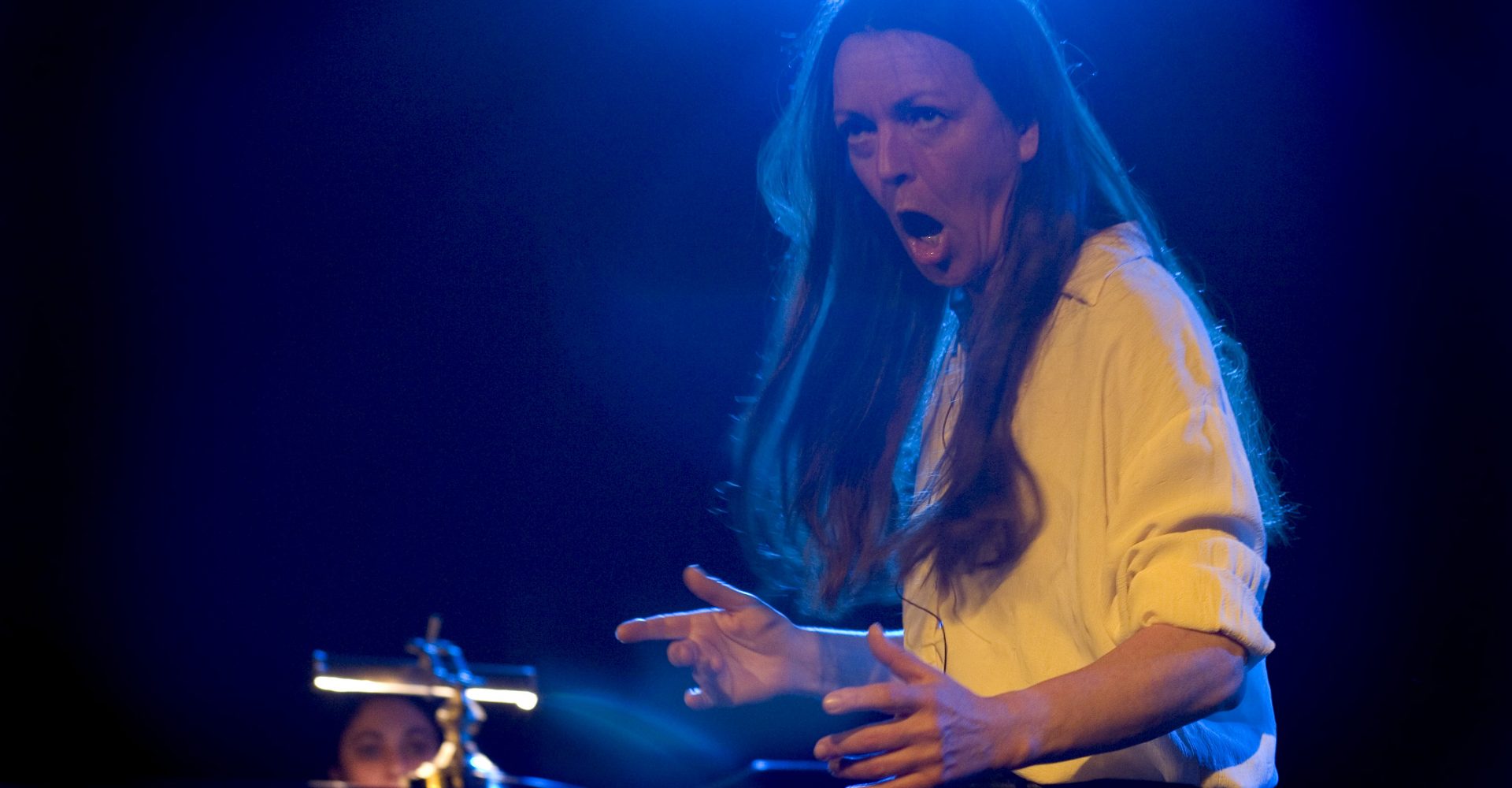 Some weeks ago I was listening to a radio programme about music and the Sami artist Mari Boine was being interviewed . She had been present at a conference about mentally ill people. Mari Boine stated that she herself would have become a criminal or a mentally ill if she could not use her life in music.

I often say that I never came to theatre because of a craving for the arts, or that I thought of myself as especially gifted, talented, as it is often said. I came to the theatre to belong, somewhere, to find a family. Not necessarily a father and mother, more like many sisters and brothers. I came to theatre to avoid having to enter the serious, lethal grown up world as I thought of it then. As I often still think of it.

I think in alternative theatre there are many of us. And I hope we make a difference. We are here because we need groups like us to exist, not only because of the over the years growing love and knowledge of theatre, but because it is vital to ourselves, and we guard and protect our small islands. And we meet, for we are after all, still floating.

Before entering Grenland Friteater, I liked to think of myself as a drifter. Travelling the world seemed to be a good option to avoid getting serious and established. As it seemed that the revolution was still very far away, and looking back I am not sure what revolution I envisioned. Many silent, almost hidden revolutions has taken place as groups of people have created their islands in spite of all odds against them.

Coming to Grenland Friteater was like finding a new family. Like belonging somewhere to someone. At that time I did not believe in personal relationships lasting for more than 3 years. I had not even considered getting involved in long time work commitment. My plan of leaving the group after a 2 weeks workshop has now been 22 years delayed.

Arriving I was the oldest of them all, in years, and the most experienced on other areas than theatre, but freshest within the craft. I knew how to work hard, and I was used to be with many people coming from a large working class family. Where the work ethics are very strict, you do your best, and a little bit more on top of that. How you deliever your work was important, because it was through the work you made a reputation. Were reliable.To not complain. To be strong. To not give up. Or give in. My father worked at the factory, carrying 25 kilos sacks of coal from the ships to the ovens. After an 8 hours shift he came home to us five children and our mother, ate with us, and went to build our house. Another 8 hours work. My mother took care of us, made our food, and worked as a cleaning woman. Our household was like a little industry in itself. Well organised.You worked until you were finished. Period.

The place in Norway where I grew up is a tiny little industrial town called Årdalstangen. It is in the west part of Norway, by the Sogne fjord. We speak a broad Sogne dialect. We also write another language than the majority. The reason for this is to put it simply that we belong to a language group that has more in common with Old Norse than the Danish-Norwegian language that the majority speak and write. The written language that I write is a made up language, a kind of synthesis of the various dialects. To make it even more confusing this written language was named New Norwegian.

My dialect are still not thought to be for theatre unless in special cases where they want authenticity on stage. Or in the one institutional theatre were they only use New Norwegian.

When my younger sister moved to Oslo in her teens , she worked as a telephone receptionist in a big firm. Shortly after she was engaged in the new job, she was told either to change her dialect or lose her job. They way she spoke was not proper and did not go well with the desired image of the firm. This was a common attitude.

For me this was yet another confirmation of my fears that being serious or established would mean having to change your own personality, your own language and becoming what they
wanted, a nobody. When I wanted so desperate to be somebody. Myself maybe?

I also moved to Oslo, but to a radical school where the slogan was:” speak your own dialect, write New Norwegian”. I was more fortunate or stubborn, and have been able to keep more of my dialect.

It is easy and natural for me to identify with the fight of the native people to learn or relearn their language as I think of our native tongue as our identity, a strong cultural link, a bond..

Norway has a foul past of treating the Sami and Roma people with as little respect as possible, and they were also forbidden to speak their mother tongue . Referring to the artist Mari Boine again, it is her staying with and use of her language and the musical traditions of the Sami that is now her well respected work.

The first ensemble production with the group was in american as the theme was based upon the works of the writers Dashiell Hammett, Raymond Chandler and Lillian Hellman. It was called “ The play is over- american dreams”. It is in many ways a long time ago, more than 20 years. We worked on a dreamed North- America. We rehearsed on finding the right American accent, and I had more than enough difficulties with this to focus on my own dialect issue.

The peace of mind was short. Our next performance was to be focused on the ” fin de siecle “ bohemians of Norway and I had to speak the other norwegian . Looking back I wonder what this had really was, I know that I was told from the director to do it, and that I was trying to blend in with the other actors who all spoke the “right” language. It probably never came a so called ”fin de siecle “ bohemian artist from my hometown which at that time probably only had two or three poor farmers and a sawmill. Still, I could have argued my case and probably I did not explain well how important this was for me .I was not aware of the implications of my own doings.

My part in the performance regarding the vocal work was disastrous. My new tongue was peculiar. Not one single person who did not know me from before would agree that I was even norwegian. They came with careful statements like …that dark haired actor you have, the one with the strong polish accent? Her norwegian is not that bad! …

Having not worked more than two years in the company I took the first important decision regarding my own work as an actor. I decided never to not speak my own dialect on stage, and instead of being a bad so called normal norwegian speaker I would try to become a better one in my own tongue.

Another major decision that has also helped me to know that I have myself and my roots and background with me even if I have entered a world of work that is so far from my beginnings was refusing to work on the 1st of May, The International Workers Day. I did it once, and not again. Being a working class girl from the west part of Norway was something I started to build on, not hide from.

Language and identity, two bodies so tightly woven together, I still think that no matter how well I get to know my foreign speaking colleagues in the world and also no matter how well I try to learn other languages there is a significant part of me that I cannot translate. So you know me, and you don’t know me. First language is first.

Why am I so occupied with this?

When I embarked upon the makings of my first solo performance based on the five last poems that the American-English poet Sylvia Plath wrote in her life, we chose the translations made into dialect. Recreations of the Norwegian poet Olav H: Hauge .

Also the notion, right our wrong that the language itself is a carrier of a culture, a culture you get to know about as soon as you hear from which part of a country, from which tradition from which class the speaker comes from.

Certainly, or ironically, my dialect has always been praised for its poetic power, it is lyrical they say, art people love it, still I have to remember that it was not good enough for them when my sister answered the phone at the reception desk.

Fuck them, I said, it is the same people saying the same things, and it is snobbish, to put it mildly, language racism to put it strongly.

With Sylvia Plath`s poems we had started a study on poetry. We came upon some theories stating the strong dramatic nerve in the building of a poem itself, that we could use in the shaping of our performances.
The favourite quote was;… The blood jet is poetry…”

We found a nerve, a rhythm, a dramaturgy in poetry that took us, later, to the makings of performances based on the poetry of Walt Whitman, Robert Creely, R.D.Laing, and for the last ten years, the works of the Norwegian poet, rhetoric and scholar Georg Johannesen.

We have created five major performances based on his works, two of them have been presented at The Magdalena Festival in Brisbane. The funny thing is that they are presented in English or Spanish, but also I have come to understand that to be able to share, you will have to be able to speak many languages, and I do not for a single moment engage in the idea that you should all be able to speak and understand my “sogne dialect”. We have enough language imperialism from before, no?

As I get older, my dialect are fading, whether I like it or not. It gets its yearly injection when visiting my hometown or meeting friends or foes from there.
Identity is not only in language though, it is in how you meet, greet, walk and yes. Talk.
As I remember and re remember my past, I have started to create characters from those times and memories. Characters based on authentic material. I have used/ transformed my father and mother, my sister and brothers. Not them as them, but what they represent as important historical, cultural and political carriers of Norwegian history. They represent a direct link . To me and to my work. Live source material.

Holding on and focusing on my story, our story I have created an important work for myself and have made the seemingly, at least for me in the beginning, unlikely and not compatible worlds of my industrial hometown and that of the theatre, the so called experimental theatre, meet. I have been able not to lose some of my important values but win them back and see them in another light. The limelight.